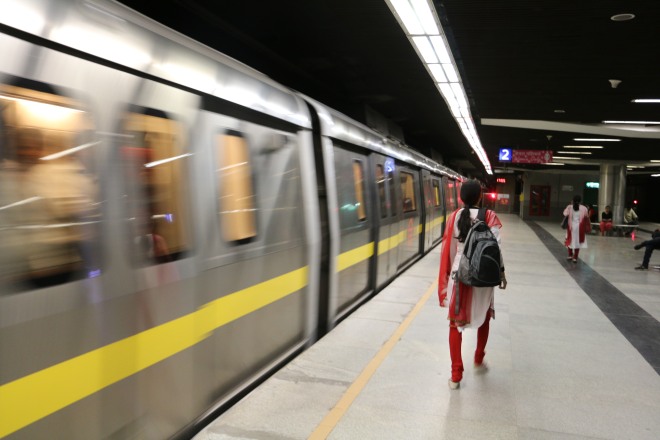 The Delhi Metro is an Indian success story – it is a clean and efficient oasis in the otherwise chaotic urban landscape of the 22 million mega city. Behind the miracle stands one man: Indian Engineer Sreedharan.

In the past weeks I did some research on the Indian Railway and Metro sector for professional reasons. Among my contacts was Mr. Elattuvalapil Sreedharan, acclaimed Indian engineer and the mastermind behind the very first Metro built in India (Calcutta) in the seventies. After completing the first and second phase of the Delhi Metro he is today known in India as the „Metro Man“.

I simply dialed up his mobile number – somebody had published it in an internet forum – and to my surprise he answered the phone himself and we had a short talk. I stayed in contact with his assistant after that. Whatever question I would pose him, you could be sure that in no time Mr. Shreeradhan would give a valid answer to all my questions.

That is truly amazing, since I am certainly not the only person calling him. Today the renowned engineer is over 80 years old and his enormous experience with large infrastructure projects in the Metro sector is still much in demand. Many big Indian cities are looking for underground public transport systems to find a solutions for their heavily congested roads.

Mainly because Mr. Sreedharan is known for completing many once-in-a-century Metro and Rail projects within budget and without any deadline extensions, he has also become a middle class hero and an example for corruption free planing of large infrastructure projects  – a truly rare matter these days in almost any country, not only in India. Whenever I take the Delhi Metro to move around the city, his friendly voice and his kind answers immediately come to my mind.

The Delhi Metro has currently a network of 213 kilometers with several lines and will grow over the next few years up to 400 km. More than 2 million people take the Metro to commute in the city every day. The further expansion of the Delhi Metro with its huge construction sites is visible everywhere in the city. Since most metro lines are going north-south or east-west – the new metro line will be an inner city ring connecting all the six existing lines to each other.

One of the biggest challenges for public transport ist the size of Delhi and its rapid expansion. Almost no-one has the luxury of living and working on a metro line. So a lot of people are obliged to switch between different modes of transport when commuting inside the city. They might start out with a Rikscha and then go on for the bigger part of their journey by metro. Many „Delhiits“ living on the outer ring or in the suburbs commute by car though, because the public transport systems are not well synchronized. That is one of the main reasons, why Delhi has such bad air quality: the traffic explodes with the rising living standard and the mobility needs of the middle class.

The Delhi Metro network with over 140 stations is one of the cleanest spots you will find in the city. There are security measures like bag and people scans at airports. In spite of tight security, once you enter the Metro stations you generally pass on with ease. The trains come every 2.5 minutes to cope with the large crowds looking for cheap and fast transport. Delhi Metro is probably the most budget friendly public transport in the world, a one way ride starting at 8 rupees (11 Cents).

Women have special „women only“ compartments at the head of the trains and it is usually worth wile walking these extra meters because they are quieter and there is also more space. The Metro is very popular among Indians, so during rush hours you can get the same feeling as in Tokyo’s subway, except that there is no Metro employee pushing you into the trains but fellow passengers. And you better be ready to get out quickly. Japanese rules like „passengers get out first before new ones enter“ do not exist in Delhi.

Regardless of that it is a very convenient way to travel especially to the suburbs or for long distances inside the city. The Satellite city of Gurgaon is connected to the metro network with its own Rapid Ring Metro. While the Delhi Metro is a public transport project, financed by the Indian government and supported by Japan with a favorable loan, the Gurgaon Metro is the first metro in India entirely financed by private investors.