Navratri, Durga Puja, Dussehra, Diwali: India is entering into its most important and also most exciting Hindu festival season. All over the country, people are fasting or celebrating, sometimes both at the same time. As a Non-Hindu, you will never really be able to decode the celebration rituals you are watching develop around you – though friends and guides will make a huge effort to explain the meaning and mythology behind it.

After the third festival season in New Delhi, I started to understand at least one of them a bit more: the „Durga Puja“.  The Bengalis are mainly responsible for thriving the Durga Puja festivities in New Delhi to a new high, by setting up temporary temples and idols all around the city to welcome the arrival of Goddess Durga. It’s become extremely popular to do „pandal hopping“. Driving around and visiting the different temples to see the specific „pandals“ – the artistic stage set up for the idols: Mother Goddess Durga killing the demon, accompanied by her four children Lakshmi, Saraswati, Ganesha and Kartikeya. The people worship the powerful Goddess and celebrate the victory of good over evil. And as no festival in India goes without food, street stalls will sell their „Durga specials“ at each location. 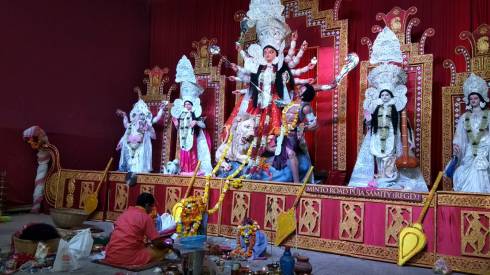 The oldest Durga Puja in New Delhi has been set up since 1909 near Kashmere Gate by the committee „Delhi Durga Puja Charitable & Cultural Samiti„. The idols and the pandal did not change over the years, and neither have the Aarti prayers, which are held by the priest in the evening time.

After more than a week Goddess Durga leaves again to return home. In a procession through the streets, the idols are carried on a bullock cart and are then immersed  into the Yamuna river, accompanied by prayers, rhythmic drum beats, dances and sometimes also tears. After all, the powerful Mother Goddess is leaving earth and humans are left among themselves.